How To Draw Women That Really Look Like Women Learning how to draw a woman is a challenge. Drawing the human figure after just learning the basics of drawing anything at all is tricky enough. A woman, though, has a distinct figure in comparison to a man. Furthermore, if you want your work to be clear and understandable to an audience, it is vital that they can immediately see that a figure is female rather than male.

The good news is that there are some easy ways to make your female characters and subjects obvious even if you are just beginning to learn how to draw people. By using curves and making yourself aware of some distinct female traits, such as hairstyles and physical gestures, you can make your female figures jump right off the page.

As wonderfully distinct from men as women are, they also share a great deal of anatomical similarity. Therefore, do not be afraid to rely on whatever you have learned about drawing people in general.

Before you begin, consider some of the basics of human anatomy as represented in drawings. The body has several parts, including the torso, head, limbs and extremities. Each has a certain proportion to each other. Recalling these proportions makes it easy to draw a man or a woman of any size because the proportions generally remain the same.

For your materials, you should start with a graphite pencil. A soft No.2B pencil or a 4B is a great choice. Get a separate eraser as well. The size of the sketch pad is up to you. However, you should make sure that the paper is sturdy so that you can erase if necessary. Paper that will not stand some erasures will require you to start over if it rips.

Starting from the Top

Begin by drawing the head. This is a critical part of your work because the head contains the face and the face is responsible for a lot of the body language that you will use in your drawing. Furthermore, the size of the head will help you determine the length and shape of the body that you draw later.

• There is no need to let the shape of the head stump you before you even begin. Simply draw the basic oval shape for a head that you have already learned. You can do a lot with this basic oval.
• If you have advanced a little more than this, feel free to play with this shape a little. The chin and jaw are major features that vary between men and women. Some people have square jaws, other have more triangular jaws with pointed chins.
• A younger woman’s head will be a little more rounded than an adult woman’s head.
• Lightly divide the shape you have used for the head with your pencil.
• Mark points on each side where the eyes and ears will be. As different as one face may be from another, each face tends to be symmetrical. Therefore, the distance of the eyes and ears from this center line should be even.
• Put the bottom of the nose halfway between the eyes and the bottom of the chin.
• Part the lips of the mouth between the bottom of the nose and the bottom of the chin, about a third of the way below the bottom of the nose.

Until you acquire some more experience, try to adhere to these guidelines when first learning how to draw women. As you become an expert, you will be able to stray from these tips and create even more stylized faces and heads.

Working Your Way Down the Body

Now we continue to the body. If you want, you can skip to this stage after creating the mere shape of the head without adding any details. You may not want to decide how the face looks until you have the body figured out. With the length of the head determined, you can create body proportions that are realistic. • Measure the head that you drew. The length of the entire female form should be roughly seven to eight times this length in total.
• The torso should be somewhere between 2 ½ and 3 heads in length.
• The legs should be somewhere between 3 ½ and 4 heads in length. Make sure that the numbers, however you configure them, add up to between seven and eight.
• The width of the shoulders should be about 2 ½ to 3 heads. You will still have to decide how much slope there will be to the shoulders. Women are not as frequently broad-shouldered as men are.
• Place the waist line about 4 heads from the bottom of the feet. This feature is essential for depicting a woman because she is more likely to have a distinct curve in this area than a man. You can decide how much of a curve will go into this area.
• The distance from the lower breast area to the shoulder-line should be one head length.
• When drawing details on the legs, make the thighs about 1 ½ to 2 full heads in length. The end point of this feature would be the kneecap.
• Use the same length to determine the length of the lower legs, including the feet.

As you gain expertise, you will come up with your own exact measurements for these segments of the body. You will see, though, that your own guidelines will not stray far from these if you are trying to draw realistic forms of women. If you want to do more than simply depict mannequins after you learn how to draw a woman, you should pay attention to the way that people present themselves. For example, most people do not stand exactly erect and look at you face to face. Artists typically depict their subjects in poses of some sort. They may be in profile, sitting down or even in movement, as the artist of this drawing shows us.

As a beginner, this is too much to deal with right away. However, you can elaborate on your work by making small changes to the way that the person stands. Change the angle of one foot, put a slight slump in the posture or just bend the knees a little.

Pay attention to the arms and hands as well. Real people do not just let their arms hang straight down. A woman may put her hand on one hip, cross her arms, raise a hand to say hello or reach out to grab something. You can quickly move from drawing simple, lifeless figures to creating more lifelike women with just a few alterations in poses and gestures.

Let’s go back to the face. Both men and women are distinguished primarily by their faces and their expressions.

• The most fundamental feature of any face is usually the eyes. Eyes can take on many shapes. This is particularly due to ethnic background but women can also use makeup to alter the appearance of their eyes. They may be round or take on a more slanted or even almond appearance. Furthermore, eyelashes may be more or less prominent. Finally, choose a color for the eyes and let your shading reflect that color.
• Think of how the nose looks when you view it on another person’s face. The bridge is not prominent when viewed from a frontal perspective. Sketch in the angles of the nose at first. Darken with additional strokes as you gain a better idea of how it appears.
• The base of the nose can vary. The nostrils may be wide and flared or they may run more continuously from the bridge of the nose.
• If viewing in profile, the nose becomes even more important. Is the bridge straight? Does the person have a rounded nose? Noses vary a great deal and there is no real scale that you can use to create proportional noses because they can be anywhere from large to small in comparison to the face. You will have to feel your own way with this feature.

The Many Hairstyles of Women In general, women have a greater variety of hairstyles than men. Like men, their hair may be of all lengths but women tend to do more with what they have. This can be a challenge to draw, but it becomes easier as you learn what to look for.

• Even if the woman’s hair comes down and covers where the hairline meets the forehead, you need to know where the hairline is.
• You are not going to draw every single hair on her head but you may want to go beyond just outlining a mass of hair. Use light strokes to indicate fine threads of hair and darker pencil lines to indicate thicker locks of hair.
• You need to determine how long the hair is and if it hangs over her shoulders or not.
• Decide if the hair will cover her ears. If not, you will have to draw the ears as well.
• Do not forget that the eyelashes and eyebrows are made from hair as well. You can simply draw these in as lines or make the bristles more prominent. There is a tendency on the part of beginning artists to depict young people with standard features of the people that surround them. As you become more proficient, try to add some variation to your drawings.  Women come in all shapes, sizes, shades, and ages. Indicate traits and facial features that are characteristic of your subject with subtle details that enhance the beauty and character of your subject.

In order to learn how to draw a woman, you simply need a lot of practice. You should get started right away. The great thing about drawing is that no one has to see your mistakes. You can do it again and again until you get it right. 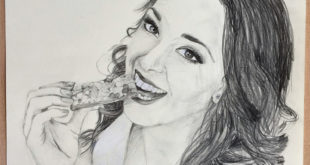 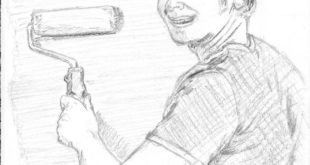 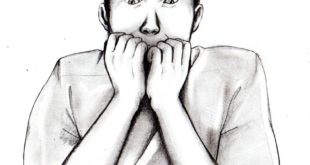