Four Drawing Shortcut Techniques You Will Not Regret Using

What I’m about to share with you is a risk for me. I’m risking mobs of angry artists coming and burning down my house and crucifying me upside down. I will be sharing a secret that many artists use that make us look like we can do the outline of a drawing without any type of help. It can be said that most of us don’t need help drawing, but if you constantly do figures like I do, you want to be anatomically correct. The secret I’m talking about is using a shortcut, such as a light box or any of the other items that will be discussed in this article.

The first question that forms in your head is: “Doesn’t using a light box constitute a form of cheating? You’re not a real artist if you use one.” Let me answer that question with a question. Can a garbage man do his job without a truck? Can a doctor operate on you without medical tools? Can a dentist take care of your teeth without the proper tools? I think you know the answer to these questions. Anyone that says you’re not a real artist with a light box is sadly misinformed. A light box is a NECESSARY TOOL if you want to be a serious artist of realistic work.

A great pro for the light box is that it saves you time. If you are like me, you need a light box to help cut down your outline drawing time, and in essence, get more art pieces cranked out than you can accomplish by just drawing freehand. It also helps with accuracy with the figures and items that will be in your picture. The light box isn’t just the only item you can use. Rather than drawing by traditional freehand, you can also use a projector, graphite paper, or guidelines. Let’s look at some examples of drawing subjects using each of these techniques.

OK so the first example here was done using a light box. The light box is used to trace the outside edges of the subject and other items that will be in the picture. Again, this technique is to help shave down time in drawing the contour outline. Here I quickly did the eyes by smudging them with a tortillion and lips by darkening them a little with a 3B pencil and then smudging it with the tortillion as well. I then started working on the hair by using an HB pencil and leaving some spots untouched to later illustrate light reflecting off the hair. I then smudge the pencil mark that’s in the hair followed by dark pencil marks that will portray hair strands. As always, do not smudge these marks. You want to show some hair detail and you cannot if these are smudged. I have also started adding some tortillion smudge to the face. It’s not much but I’m not worried about it for the time being. I have time to go back and add more later. As you can see, I’ve started on her outfit. Nothing special here; I used a 3B pencil and shaded/smudged the black with a tortillion. I then used the same tortillion to add some shade and coloring to her sports bra. The last thing I needed to do was add some detail to the skin and arms by using a tortillion again. I went back to the head again and just added some shading to the forehead to illustrate some realism. OK, unfortunately this drawing was a fail project. I was supposed to illustrate the second item you can use to draw the outline of a figure but I ended up using a light box to quickly get it done. With this picture, the projector was supposed to be used.

I learned a valuable lesson that I will pass on to you guys. When using the projector, you need to make sure that the paper you are drawing on is a BIG piece of paper – 18×24 preferable. If you do it on something small, you will have to bring the projector closer to the paper and that’s bad business. You will not have any room to move around, plus you run the risk of bumping into the projector and knocking the tracing off point.

It would be best that you use a bigger piece of paper and not like what I did when getting ready for this article. Glad though I found out so I could give you guys a no-no pointer.

Now this next technique is what I used when I first started drawing. I kept my method a secret from everyone in fear of being exposed but now, who cares right? I’ve learned that many people don’t care what technique you use, in contrast to the actual concept of the art piece and the medium used. I don’t think I remember how this technique was presented to me except that I was in Michael’s and I saw graphite tracing paper and I put two and two together. To me that was heaven sent; I needed something that would cut my outline, drawing time down and here it was! The only bad thing about using graphite tracing paper is that it’s messy. You’ll get some of the graphite onto your fingers and on the paper that you’re tracing on, causing unnecessary erasing.

You start by first having the sheet of paper that you will be drawing on, followed by the graphite paper, then the picture on top that you’ll be copying. Another thing you might want to do is tape the original picture to the paper that will be the copy and casually slip the graphite paper in between the sheets of paper and trace. You guys know my routine by now: eyes, lips, and eyebrows. With the eyes, don’t forget to add some highlight for the pupil and iris and add some shading to the upper part of the eye to show a little bit of shadow. Smudge the eye lid crease and the eyebrow, adding some hair to illustrate random detail. Hair is pretty simple here. Color it fully using a 3H or 2H pencil. Take some tissue and blend/smudge over the whole pencil marking. Once you’ve done that, go back with a darker pencil and add strands to the head to portray different tones. The pencil strokes will be the darker part of her hair. The last things we will do is first add tone to her shirt with some blending. After that, we will take a tortillion and add shading on the face and neck where necessary. The last technique we will look at is one that I don’t care for – guidelines. In some cases, measuring is involved. You need the right distances between the eyes, noses, mouth, and hairline. You may need to get the proper measurements off the original picture and then add or take away inches and centimeters depending on the size of paper that you will be working on. You can also use a see-through grid that already has grids and lines placed on the plate. You then just put it on top of the picture and then mimic what you see onto your sheet of paper. You want to break up the grids into individual sections and focus only on what is in one grid at a time.

The same goes with the regular lines. They will be a bit more of a challenge because you won’t have a small section to draw in. The lines in this case serve as guidelines in drawing down the basics. Once you have the basics down, attack the eyes first. As always, don’t forget the highlight in the eye and the upper shading in the eye. If you have a second, go ahead and smudge the eyelid crease and the eyebrow some so as not to forget like I have in the past.

You got my pattern down yet? Eyes, mouth, and hair. In this state, you knew the mouth and lips were coming. You have a choice here. You can draw some lines on the lower lips to implement shading or you can just begin smudging with a tortillion. In this case, I smudged it with a tortillion, both top and bottom. I also used a little bit of a dark pencil (7B) and tortillion to shade and smudge the inside of the mouth and the small space between the teeth and gums.

The hair is easy in this situation. She’s a blonde so I will use a 5H pencil to color the hair and fill in certain areas where it’s darker. I will then smudge the entire area will tissue – it serves the same purpose as a tortillion would but it spreads the graphite wider. The last thing I will do is use a pencil eraser to add in highlights. I find this easier to use than a kneaded eraser – I don’t have to worry about re-shaping the eraser or it giving way to the pressure of erasing. I start now on adding some shading to the face (using tortillion after the aftermath), some shading scribble to her shirt, and adding dark tone to her secondary tank top underneath. The last thing to work on is to smudge and blend areas in her face and arm, and in her shirt. Now that the secret is out…

Again, we used these drawings of different faces as a quick study on how to use shortcut techniques to sketch an image onto a sheet of paper from its original picture. I’m pretty sure a mob of angry artists is not going to be too happy thinking I’ve given their secret away; but hey, it’s not a secret. These are necessary tools and tricks that don’t get time in the spotlight. Hopefully this article will help shed light on some of the methods that we use, and hopefully those methods are not interpreted as “cheating.” 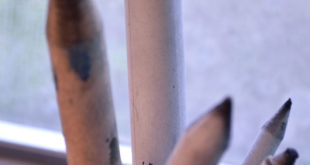 How to Use a Blending Stump for Realistic Effects 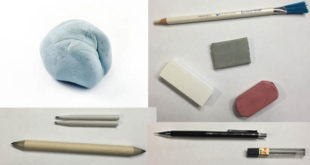 Drawing Materials for Both the Beginner and the Advanced 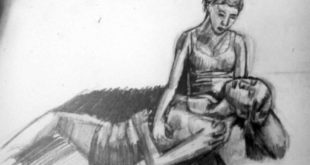 What to Consider When Making a Composition