Alright guys, you know the deal. For some reason I’m back again. Well if you think about it, there’s no way I could just do a tutorial on colored pencil for the eyes and just leave it at that. Couldn’t leave you guys feening for more, so I had to come back to do another facial feature with the colored pencil despite my scanner having other plans. Yes people, it still wants to rebel against my colored pencil tutorials, but I think I found a way to get around it.

Drawing a Nose in Colored Pencil from the Front

As you can see, I do a very basic drawing of one large curve that is aimed downward accompanied by smaller curves that are above the bigger curve. This is the same technique I use to show any student who wants to learn how to draw the face.

The nose can be the most challenging because the angle of the face/head will affect the shadow and tone on the nose and therefore change the look and arrangement of it.

Here I actually take a tortillion and add some darkness to the nostrils. I do not need to add black; the graphite on the tortillion is believable enough. Usually when dealing with black on a colored pencil piece, I have a choice of using the graphite in the pencil or a black colored pencil. It really doesn’t matter. It just depends on how I feel that day. I also add curves that will serve as edges of the nose and take away some of the bulb end of the nose with a Blu Tack eraser. I also smudge the edges to illustrate some shadow. I want it to be as realistic as I can get it, so I get rid of the hard lines and soften them.

OK here is when I experienced the scanner wanting to do its own thing and my work was set back some, but as I did in the tutorial of the eye, I just used my camera to get the picture. I’m really not sure which one I used for this picture, but the important thing is it got done one way or the other.

Here I started using Prismacolor Dark Brown – the intention was to make it an African-American nose, but it’s going to end up being some alien purple creature nose. As the picture illustrates, you want to add some markings in the middle of the nose but only to one side to show light reflection or lighter skin tone to the other side.

Also, round out the bulb of the nose by rounding out the color near the edge of the nose but leaving some room for light reflection.

Add the same skin tone to the wings of the nostrils and leave some light separations between the nostril wings and the bulb of the nose. Deepen the color on the nose some and you’re practically finished. This is optional. As I said in the eye tutorial, I do this part when I want to smooth out an art piece that was done in colored pencil, crayon, or chalk. Again here you want to load the image onto your computer and use the painting program that you have loaded on it. In this case, I have PaintShop Pro and I use the smoothing brush. It’s not perfect but it makes it look better and smoother. Drawing a Nose in Colored Pencil from the Side

Want to try another? Let’s go for it!

This one is a must but a simple one. We’re going to draw the nose from a different angle – sideways, simple and easy. Look and follow what the illustration shows.

Use a tortillion to add some darkness to the nostril and use it again to shade in a curve that will show the winged part of the nostril. Here I started adding some dark brown to the underside of the nose and some peach beige to the rest of the nose even though you can’t see it that well…yes people, my scanner was in its rebel stage again. Here I just deepened and blended the color some so that it was more believable. Last stage, I smoothed it out on the computer and it’s somewhat complete. It would look more believable if a face was added to it but one thing at a time. One must crawl before one can walk. 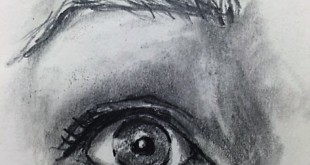